Ayden and Rylee are loving their preschool, and so am I! It's not always the easiest to get them out the door in the morning, but they are always excited and happy once we get there, running off to play with their new friends. Ayden sometimes says he doesn't want to go to school and whines about it, but again, once we get there he is raring to go! And they are always happy when I pick them up (although that happiness sometimes almost always turns to whining/crying shortly after we get in the car or get back home).

They can both recite the Pledge of Allegiance and have learned the days of the week. They often sing new songs that they have learned at school. Their coloring skills have improved drastically, especially Rylee's. Not to say they aren't still scribbling all over, but at least it's more intentional. They are tracing letters and learning the sounds that vowels make.

I have been told that they are two of the best helpers in class and do a great job following directions. Not only do they pick up the toys that they were playing with, but when they have their area cleaned up, they help clean up other toys as well.

I love that their school does fun things like having a Grandparent's Tea, field trips to the pumpkin patch, and holiday parties. They also do Dress Up Friday every month. Today was dress up day and the theme was Superhero's/Princess. The kids were SUPER excited to dress up again, so soon after Halloween! Rylee got to choose between wearing her Anna dress or her Snow White dress. She chose Snow White, which didn't surprise me because it's a much more fancy dress, lol. I found Ayden a used Spiderman costume on a Facebook for sale site a few weeks ago. I kept it hidden until yesterday, and oh boy, was he pumped! Of course, Rylee was a little bummed that she didn't get a new costume to wear too.... She was still excited to wear her Snow White dress to school though. 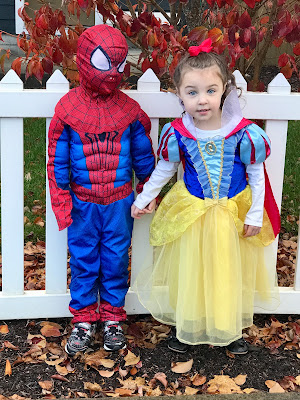 As for me, I'm not accomplishing much while they are at school. Actually, that's not true. I HAVE started running jog/walking in the last few weeks. I feel very accomplished in that. I also do get some uninterrupted cleaning done. But I still need to finish painting the inside of the house! At the very least, I need to finish the living room so the walls aren't polka dotted with spackle. I just can't get myself motivated to do it when 2.5 hours goes by SO FAST! It feels like I will be getting all the painting supplies out, and barely get started painting before I have to put it all away again. There's no WAY I can leave it all out for the kids to get into. I'd love to be able to paint while they are home, but they insist on helping with everything! There's no way. I would lose my sanity, which already holds on by a thin thread sometimes.

One of these days I'll get the painting done, but for now, I'm going to just be proud of myself for pushing myself out the door and running again.