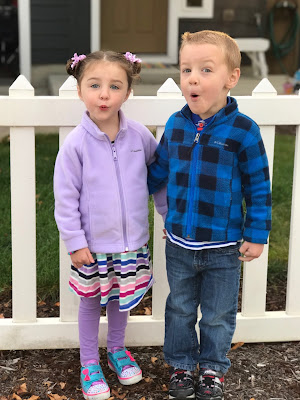 These two goofballs will be FOUR next month! I'm a little sad, nostalgic, overwhelmed... at the thought of them being four. I mean, that is only ONE year away from them turning FIVE!!! And that just seems too old for my babies to be. It's such a total cliche, but they are growing up too fast! They aren't allowed to be big kids already! No. Just, no.

Aaanyyyywayyyyyy, so now I'm in the midst of planning their birthday party. I'm not a party planner. I don't come up with fancy themes. I don't label food to match said fancy theme. In fact, we had their first birthday without a theme AT ALL! *Gasp* For their second birthday, we had an Elmo birthday candle, Elmo plates and napkins, and there wasn't a single other kid at their party. Last year, I got inspired and actually did go a little overboard with the whole Dinosaur/Princess theme, and even gave out goodie bags to all the kids in attendance, but that's not something I want to do every year.

Yet, somehow, here I am planning a big birthday bash. We went round and round, tossing out different ideas for their birthday party. What I REALLY wanted to do was have it at the local fire station, but I found out that they only do tours and that wasn't quite what I had in mind. We considered renting out a bouncy house place, but it's pretty expensive and would limit who we could invite to the party. We thought about having it at our house, but our new place isn't set up to accommodate everyone either. If we did just family and didn't invite friends, we'd probably be okay, but we'd really like to invite all their little friends.

We settled on renting the local community center. And now we are inviting their entire preschool class!! Oy. It's a lot, but since we are doing it at the community center, there will be room and we figured, why not? So now I have to come up with activities to keep a bunch of preschoolers entertained. Double oy.

We are doing a Christmas themed birthday party. Tony didn't like that idea at all, saying he thought we needed to keep Christmas and their birthday separate. I completely understand, considering I'm the one that REALLY hoped they wouldn't be born on the 24th or 25th just so they would have their own special day. Their birthday ended up being on December 23rd, in case you didn't know that already. However, I see nothing wrong with having a Christmas themed birthday party! What is the difference between that and the two Halloween/costume parties we went to in October? It's not a CHRISTMAS party, just the "theme." Tony has finally come around on the idea, or at the very least, has backed off his objections and is rolling with it. A very good thing, because as I stated earlier, I am not a party planner! Plan A at the fire station was nixed, and if he didn't agree to the Christmas theme.... the thought of coming up with a Plan C made me want to hurl myself off a bridge! Not really, but you get the idea.

As of right now, we've got the venue booked, invitations done, and their birthday t-shirts ordered (by my good friend at Double Blessings Designs; she is amazing). I will order a Costco Cake and make finger foods, and so far the activities include cookie decorating and pin the carrot nose on the snowman. I just need to come up with a few more activities/games/crafts for the kids to do. Suggestions are welcome!