Looking Back at December

December started off a bit rough for us, with Ayden being sick. It started on Thanksgiving, with him complaining about an upset tummy and getting a low grade fever. He ended up sleeping all that afternoon. It was the strangest thing, because he woke up every morning fever free, feeling better and having more energy. But by around 11:00-Noon each day, his fever would come back and he'd end up sleeping the afternoon away. He went to bed (for the night!) anywhere between 4:30-5:30. Then he'd wake up soaking wet every single night around 2:00am, because his fever broke, and we'd have to change his pajamas and bed sheets. This went on for DAYS! Every morning when he'd wake up fever free, eat breakfast and be full of energy, we'd think we were finally over the hump. Nope. He crashed every afternoon, and our amount of good time in the morning was dwindling. I finally took him to the doctor on day six. He had pneumonia (strep and flu both came back negative). Then after 2.5 days on antibiotics, he still wasn't getting better! After texting back and forth with his doctor, we got a prescription for a stronger antibiotic. That didn't seem to be working either. This kid was so sick. He was down to about a grand total of an hour of productive time in the morning, before his energy was completely zapped and all he wanted to do was sleep. Two days later, I took him back to the doctor. Somehow, in addition to his pneumonia increasing, while ON antibiotics already, he managed to also get an ear infection on top of everything. His appendix was also pretty tender, so they ordered an ultrasound in addition to the chest x-ray. He had a little bit of fluid around his appendix that they would keep an eye on. Finally, FINALLY, he started to feel better. The third antibiotic did the trick and worked it's magic. We went back to the doctor for a follow up and he was given the all clear to return to school. Hallelujah! He was sick for 11 days, missed Thanksgiving and 6 days of school, and it took three different antibiotics, but he finally was on the mend. 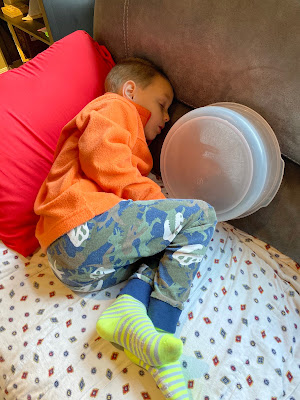 We had a lot to juggle during these 11 days! We still had to get Rylee to school every day. Throughout all this time, she never got sick at all! We had basketball practice and games, which Ayden obviously had to miss. Mac and Cheese (our Elf on the Shelf) arrived. Rylee had her Nutcracker recital, and sang in the Christmas program at church, which Ayden had also been supposed to participate in. 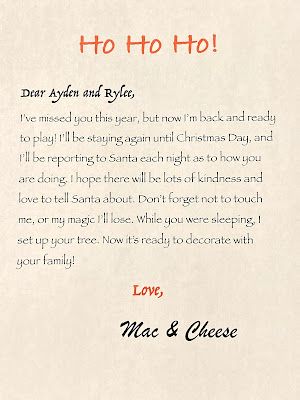 Thankfully, Ayden made his recovery just before their birthday party! We had started to get concerned that we were going to have to cancel it. Nobody ever has time for being sick, but December is extra busy for us, between their birthday and the holidays! We had a Super Hero/Pokemon costume birthday party. There were quite a few people that ended up not being able to attend the party due to their own illnesses, but the kids still had a few good friends that were able to come and they had a fantastic time. 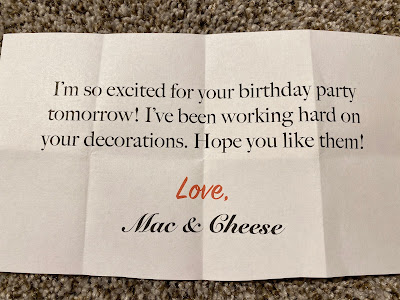 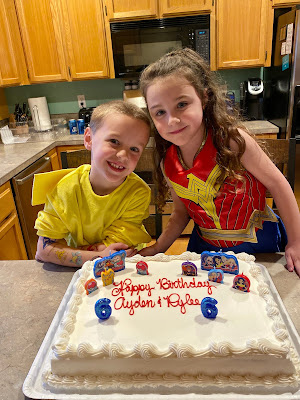 Another exciting thing that happened in December was that Rylee was awarded Student of the Month! The assembly was just a few days after Ayden returned to school. I was so happy that he was feeling better, which also meant that I was able to return to work and was able to be there to see her get her award. 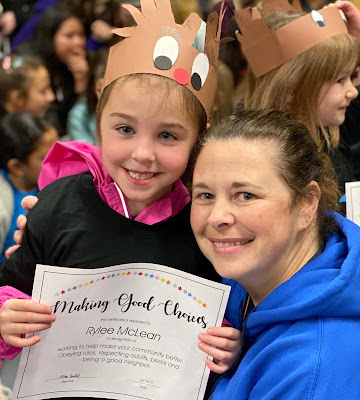 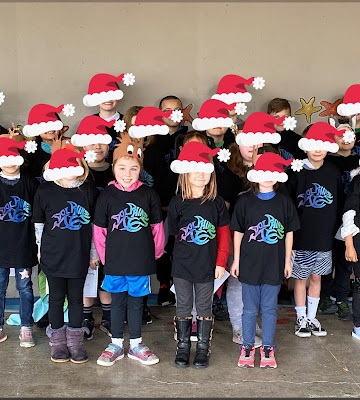 We had a family day to see the new Frozen II movie, which Rylee absolutely LOVED and Ayden tolerated. I think he enjoyed it, but he wouldn't admit it. LOL. After the movie, we took the kids shopping to pick Christmas gifts out for each other. They couldn't keep the surprise for long though. The very next morning, they told each other what the other's gift was. Haha! And they talked about it every single day until Christmas morning!

After the movie and shopping, we drove around our neighborhood to look at all the Christmas lights, and made a special stop to one house that goes all out every year. They had special guests in attendance that night, with Santa and a few princesses. 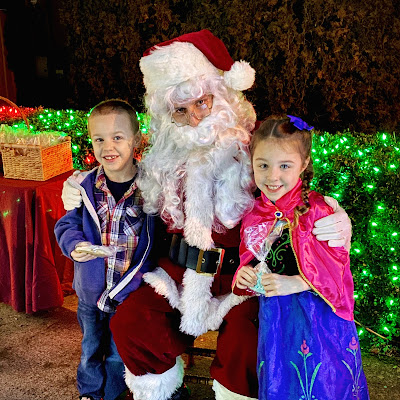 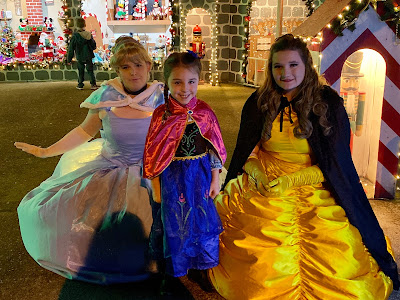 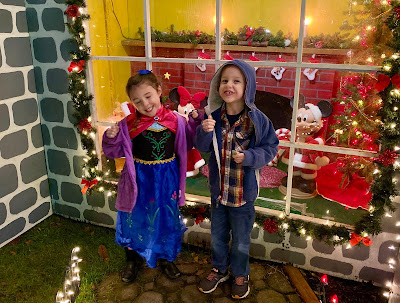 Ayden lost his other top tooth one day at school! He literally lost it, lol! He said he went to wiggle the tooth, and it wasn't there!!!! 😀 I helped him look, but that tooth was nowhere to be found. It was during lunch, so there's a possibility that he may have swallowed it. We'll never know what happened to that tooth! The Tooth Fairy still paid him a visit though. This was his fifth tooth lost so far.

We spent their actual birthday at Great Wolf Lodge this year! Tony and I had never been there before, so this was a first for all of us! We had debated on whether or not we needed to reschedule, because all of us were fighting off colds at this point, but we powered through and had a great time. 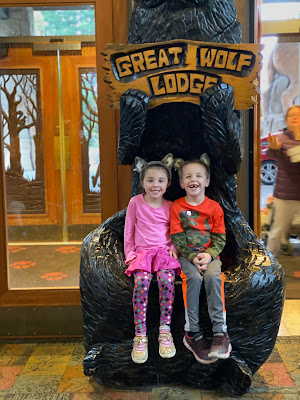 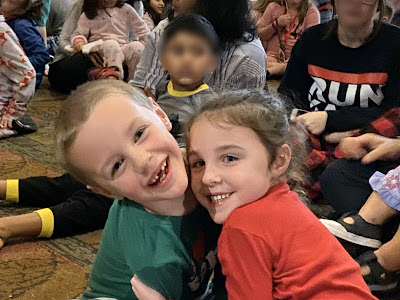 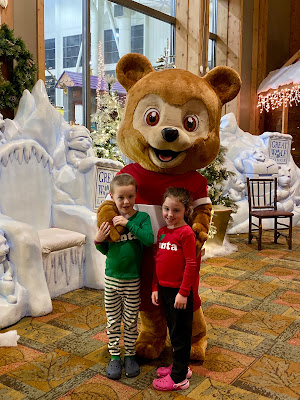 We hosted my family at our house this year. My sister and her family, and my mom, came early and joined us for the Christmas Eve service at church. Then my brother and his family joined us back at my house after church. I love that Ayden and Rylee get to have these Christmas memories, getting together and playing with their cousins every Thanksgiving and Christmas Eve. I remember those times with my own cousins and remember them fondly.


Santa came, and Mac and Cheese had to go home. Ayden was beyond thrilled that Santa brought him the Charmander stuffy he'd asked for. Rylee loved her Anna and Elsa dolls. 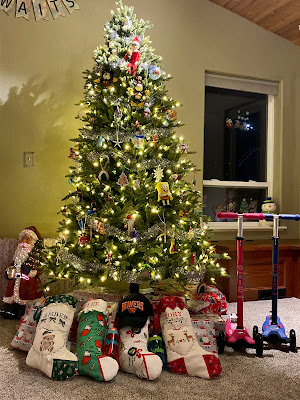 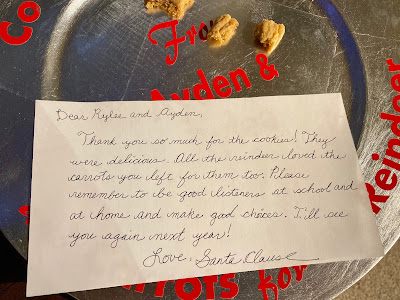 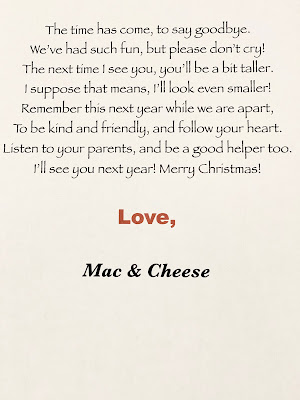 Our last big hurrah in December was a trip up to Washington to find some snow and spend a few days with Tony's brother and his family. We didn't find very much snow unfortunately, but the kids had a blast sledding on the little that we did find! 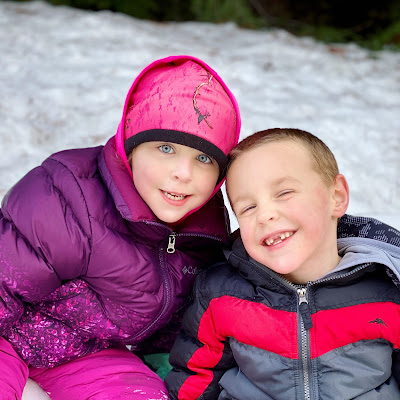 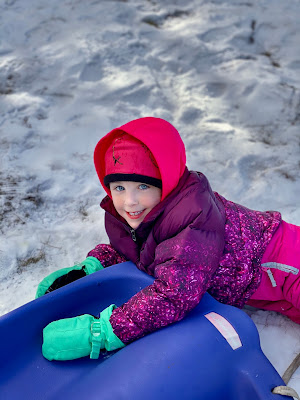 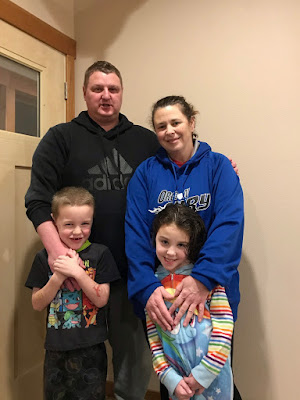 December may have started off a bit rocky, but we still managed to make some great memories throughout the month! December is still my favorite month out of the year.
Posted by Amber at 12:00 AM